1.5 Periodic reviews - What do the Treaty Bodies do?

Although each Treaty Body focuses on a different treaty or convention, the tools available to the Committees are basically the same, with some procedural variations.

The next sections focus on the main activities and outputs of the Treaty Bodies which include:

This section explores one of the key mandates of the Treaty Bodies:

One of the primary mandates of a Treaty Body is to monitor State parties’ progress in implementing their obligations under the relevant treaty.

All Treaty Bodies are mandated to undertake periodic reviews of State parties (except for SPT).

See here for a full list of Treaty Bodies and what each can do.

What happens during the periodic review process (reporting cycle)? 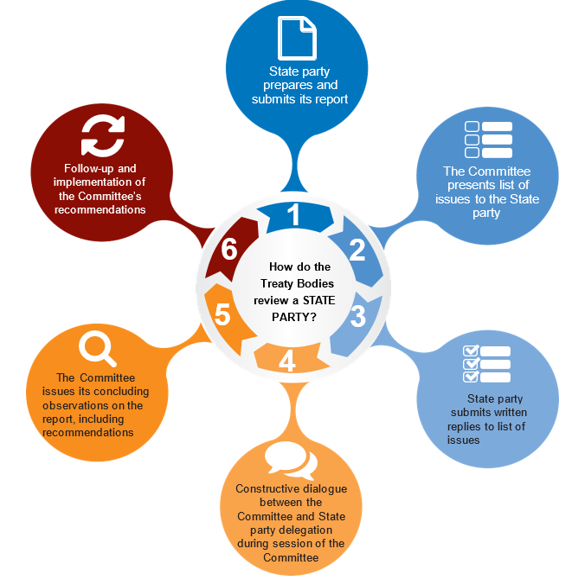 These stages are examined in detail below:

Once States ratify one of the nine core human rights treaties or conventions, they are obliged to submit periodic reports to the Treaty Body that oversees that treaty. The report details how the State is implementing the human rights treaty provisions.

States are encouraged to prepare their reports to the Treaty Bodies in broad consultation with national human rights institutions (NHRIs), NGOs and civil society in order to make it as comprehensive and as inclusive as possible.

A comprehensive State report will contain:

The OHCHR provides technical advice and support to States to meet their treaty obligations, including reporting requirements.

The Treaty Bodies have developed different reporting guidelines to ensure uniformity and completeness in providing an overview of the human rights situation in the country. These guidelines can be found on the individual Treaty Body webpages. The OHCHR also offers a compilation of guidelines on the form and content of reports to be submitted by States.

The periodicity of reporting depends on the Treaty Body and is recommended to be every 4-5 years to ensure regular monitoring and assessment of the human rights situation in a particular State. As States are often late in reporting, in reality periodicity of reporting is on average every 8 years. In 2019, the Human Rights Committee became the first Treaty Body to adopt a predictable review cycle, with reviews of States parties conducted every 8 years.

2. Treaty Body presents list of issues and questions to the State

All the Treaty Bodies (except SPT) present a list of issues and questions (LOI) to the State under review prior to its session. The LOI are a set of questions around specific human rights issues relevant to that particular State, and generally follows the structure of the relevant treaty. It helps to guide the State in preparing for the review, as it indicates the nature and focus of questions that will be raised during the Treaty Body’s examination of the report.

The State’s responses to the LOI can serve as a supplemental source of information to the Treaty Body, especially if significant information is missing from the State report.

CCPR, CESCR, CEDAW, CAT, CMW, CRC, CRPD, and CED require States to submit a written reply to the LOI, whereas in the case of CERD, there is no formal requirement to do so.

What is the Simplified Reporting Procedure?

The CCPR, CESCR, CEDAW, CAT, CRC, CMW, and CRPD offer the option of a simplified reporting procedure. For some of them, this option applies to periodic reports which are submitted after a State has filed its initial report under a particular Treaty. CERD offers the simplified reporting procedure to those States whose reports are overdue by more than 5 years, prioritising those overdue by 10 years or more.

To find out if your country has opted for the simplified reporting procedure under any of the core treaties, see the individual Treaty Body webpages or contact the relevant Treaty Body Secretariat. 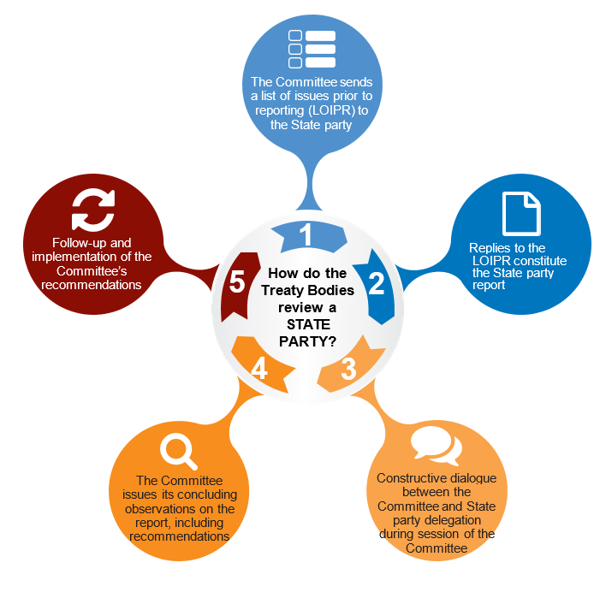 4. Constructive (or interactive) Dialogue between the Treaty Body and the State

A Treaty Body considers the State report through a constructive (or interactive dialogue) with the State party during the session of the Committee.

After considering the State report and other information presented, a Treaty Body issues concluding observations and recommendations to the State party.

The concluding observations provide authoritative guidance to the State to further the implementation of human rights obligations.

Concluding observations and recommendations normally include:

The concluding observations often recommend changes in law, policy and programmes, establishment of institutions or organs to ensure implementation, and any other relevant measures.

Concluding observations of all Treaty Bodies are usually made public on the individual Treaty Body webpages, and are included in the OHCHR weekly newsletter. They can also be accessed at www.universalhumanrightsindex.org.

Subsequent periodic reports provide an opportunity for the State to inform the Treaty Bodies of how they have followed up on previous concluding observations and recommendations.

6. Follow up and implementation of the Treaty Body’s recommendations

To see how Treaty Bodies follow-up on the implementation of its concluding observations and recommendations to a State party, see ISHR Academy: Follow Up - What do Treaty Bodies do?

Example of a State report for a periodic review

Example of a State report under the Simplified Reporting Procedure

Examples of concluding observations and recommendations

Go to the next sections to find out more about other tools and outputs of the Treaty Bodies, including: individual communications, general comments, inquiries, early warnings and urgent actions, and follow-up activities.

Or for more information on periodic reviews, including examples of how human rights defenders can participate in the process, you can jump to Chapter 3: