Quick Search: go
Learn > Treaty Bodies > 3. Opportunities for You to Engage > 3.5 Engaging prior to the Treaty Body review
Treaty Bodies

3. Opportunities for You to Engage

3.5 Engaging prior to the Treaty Body review

This and the next section provide information and tips on how you can input effectively into the review of your country.

It follows from the section on Periodic Reviews – Why are they useful?

There are several ways you can participate in the periodic review process – you can:

Section 3.5: Engage prior to the Treaty Body review

This section focuses on:

Engaging prior to the Treaty Body review 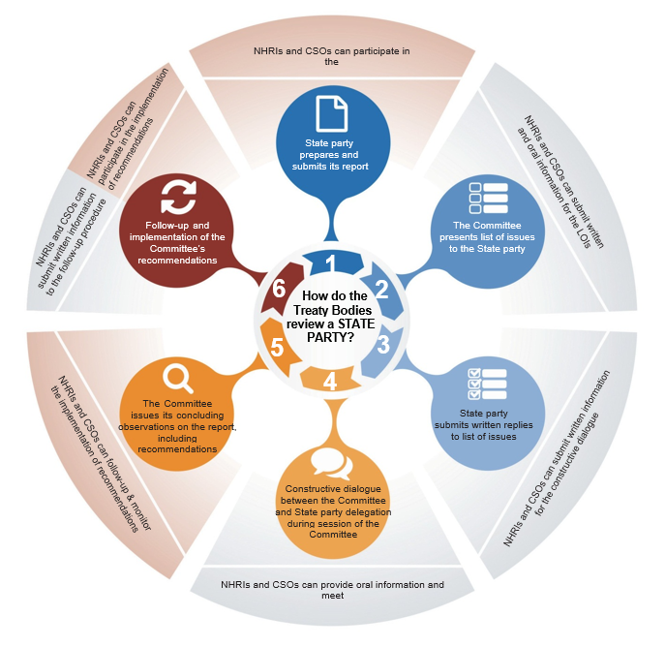 You can participate in the periodic review of your State by the Treaty Bodies by:

Periodic reviews – Find out the status of review of your country

To find out when your State is due to be reviewed by a Treaty Body, the history of State reports submitted, information received from NHRIs and civil society in previous reporting cycles, concluding observations, and follow up comments and reports:

⚠ Remember! In practice, the Human Rights Committee is currently the only Treaty Body with a fixed and predictable review cycle, although it is expected that other Treaty Bodies will follow.

You can then participate in the periodic review of your State by the Treaty Bodies:

You may be invited to participate in national consultations preceding the drafting of the State report, if the State chooses to organise them.

A number of States involve civil society (as well as National Human Rights Institutions, media, parliament, etc.) at the early stage of preparing their periodic reports to the Treaty Bodies which is a good practice to ensure the report is as comprehensive and inclusive as possible.

During the review, most Treaty Bodies will often ask the State whether their periodic report was the subject of a consultative process.

Unfortunately, not all States make the effort to include the participation of other stakeholders in national consultations, and NGO perspectives and information are often excluded from the State party report. If your State does not organise national consultations, or if you are unsure whether your views will be accurately reflected in the State compiled report, you may wish to submit an alternative or shadow report to the Treaty Body or participate in (and influence) the periodic review in other ways (see below).

In South Africa, NGOs participated in consultations for the State’s initial report to the Committee on Economic, Social and Cultural Rights (CESCR) in 2017. The initial report of South Africa to the CESCR noted that extensive consultation with civil society had taken place and that comments by civil society organisations on the draft report had been incorporated in the final draft.

In 2018, when the initial State report was reviewed by the CESCR, a group of three NGOs submitted a joint report which focused primarily on the situation of human rights defenders of economic, social and cultural rights, including those in the mining sector. The text of this NGO report contributed to a dedicated paragraph in the CESCR’s concluding observations, including three focused recommendations on the situation of human rights defenders in South Africa.

2. Submission of information for the LOI / LOIPR

Prior to the formal review, all Treaty Bodies (except SPT) prepare a detailed list of issues and questions (LOI) for the State reviewed, for State response. You can submit written information to assist the Treaty Body in drawing up the list of issues for your country.

This process is similar for those Treaty Bodies who offer the simplified reporting procedure, in which case you can submit information to assist the Treaty Body to draft the list of issues prior to reporting (LOIPR).

Inputting into the LOI / LOIPR is a valuable opportunity for you to influence and highlight specific human rights issues in your country, as these lists have a direct influence on the content and focus of the country review. Your input also ensures that the Treaty Body will ask all the relevant questions ahead of the review, which may not be addressed in the State report (LOI), or in the absence of a State report entirely (LOIPR).

During the review of China by the Committee on the Elimination of Racial Discrimination (CERD) in 2018, a group of NGOs including Chinese Human Rights Defenders, made a joint submission to the Committee for its consideration in preparing the list of issues and themes to be sent by the Treaty Body to China. The NGO submission included a range of suggested issues and questions relating to the situation of ethnic minorities in China, including Tibetan and Uighur minorities. These submissions were integrated in the list of issues which were adopted by CERD and presented to China.

Whether or not you are involved in the preparation of the State report, you can submit a report of your own to the Treaty Bodies, based on your findings and views on the national implementation of the relevant treaty. Such alternative or shadow reports from national NGOs are of particular value to the Treaty Bodies in examining State reports, as they provide an alternative source of information on the human rights situation in a particular country.

Information submitted by NGOs will be included in the relevant country file prepared by OHCHR for the Treaty Body members prior to the review of the concerned State.

⚠ Remember! You can reference general comments of the Treaty Bodies in your submission to support your legal arguments on how a Treaty should be implemented by your State. Relevant findings contained in a Treaty Body inquiry report can also be referenced.

During the fifth review of Australia by the Committee Against Torture (CAT) in 2014, a joint NGO report was prepared by the Human Rights Law Centre, informed by a coalition of NGOs from across Australia and endorsed by 77 NGOs. It addressed key issues related to Australia’s compliance with the Convention Against Torture, highlighted gaps, and identified significant areas in which the Australian government was failing to meet its obligations. Although the report is lengthy (115 pages) and detailed, it contains concise proposed recommendations to the Committee.

In 2016, the Committee Against Torture (CAT) undertook a special review of Burundi based on widespread allegations of torture related to political unrest in the country. A coalition of national human rights defenders and international NGOs prepared a joint alternative report to CAT for consideration in its review of the State.

After the first day of the review, the government of Burundi stated that the NGO alternative report had not been made previously available and it therefore had insufficient time to review the allegations contained within it. The State made the unprecedented decision to not attend the rest of the review. In its response to the government of Burundi, the Treaty Body stated that it regretted Burundi’s decision to discontinue the dialogue and reminded the government that reviews are based both on the reports of State Parties and information received from civil society. The review was completed without the presence of the Burundi government delegation.

Burundi’s lack of cooperation with the CAT was subsequently noted by the UN Human Rights Council and mentioned as one of the factors evidencing a deterioration of the human rights situation in Burundi, which subsequently contributed to the establishment of a UN Commission of inquiry on Burundi. The UN Human Rights Council Resolution establishing the Commission of Inquiry condemned the “unprecedented non-cooperation of the Government of Burundi with the Committee against Torture during the review of the State on 29 July 2016, and the retaliatory threat to disbar Burundian lawyers participating in the review”.

This includes NGO input to the LOI / LOIPR and NGO alternative or shadow reports.

Who can submit information?

Submitting information to a Treaty Body for a periodic review

When preparing input to the LOI/LOIPR or drafting shadow or alternative reports, you should consider the following:

⚠ Remember! You do not need to be a legal expert or lawyer to produce a submission or report to a Treaty Body.

How do you submit information for a periodic review? 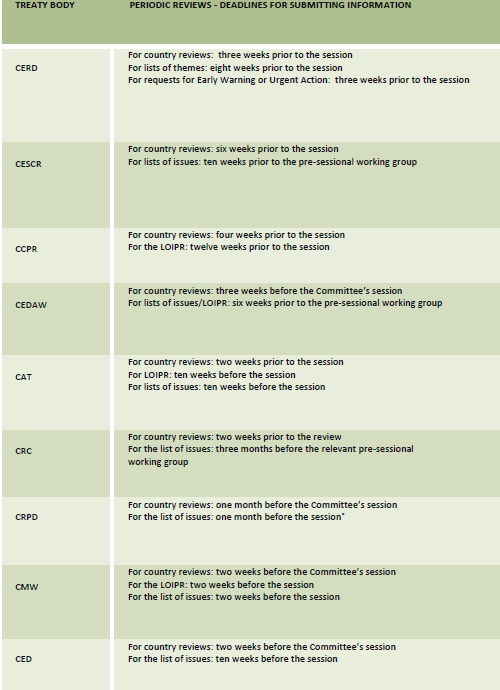 To view the table on the Treaty Body Periodic Reviews: Deadlines for Submitting Information, click here

Where should information be sent?

Submissions (inputs and reports) should be submitted electronically to the OHCHR Secretariat of the Treaty Body (a hard copy is no longer required).

Go to the next section for tips on how you can participate in the Treaty Body review and post-review follow up.