3. Opportunities for You to Engage

This section provides information on how you can request a Treaty Body to initiate an inquiry.

It follows from the last section on Inquiries – Why are they useful?

The inquiry procedure can be a useful tool of the Treaty Bodies if used strategically by a human rights defender.

You can engage in Treaty Body inquiries in the following ways:

Who can submit information?

Anyone can submit information to a Treaty Body for consideration to commence an inquiry.

There is no requirement that organisations have ECOSOC status (or be registered with the UN).

Individuals also can submit information to a Treaty Body.

As mentioned, not all Treaty Bodies are able to conduct inquiries across all States. There are two pre-conditions:

Article 20 of the Convention against Torture mandates the Committee against Torture to conduct confidential inquiries. Of the 169 States who have ratified the Convention against Torture, those that do not recognize the competence of the CAT provided for under article 20 (that is they have opted out of article 20 and do not consent to CAT inquiries) are: Afghanistan, China, Equatorial Guinea, Eritrea, Israel, Fiji, Kuwait, Lao People’s Democratic Republic, Mauritania, Pakistan, Saudi Arabia, Syrian Arab Republic, the United Arab Emirates and Viet Nam.

What information should you include?

Details on what information you should provide to individual Treaty Bodies is available on the web pages of the particular Treaty Body (on the page related to inquiries), where available. Please ensure you consult these, as each Treaty Body has its own particular working methods. See below for links to the relevant webpages.

Submissions can be made in any one of the UN languages: Arabic, Chinese, English French, Russian, Spanish, with a summary in English if possible if the submission is not in English (this to accommodate the majority of Treaty Body members who may not be conversant with the language of the submission).

Submitting information to a Treaty Body for an inquiry

To request an inquiry:

To make submissions in regard to existing inquiries:

For detailed information on the inquiry process and specific working methodologies of individual Treaty Bodies:

Where should information be sent?

What can you expect after you make your submission? 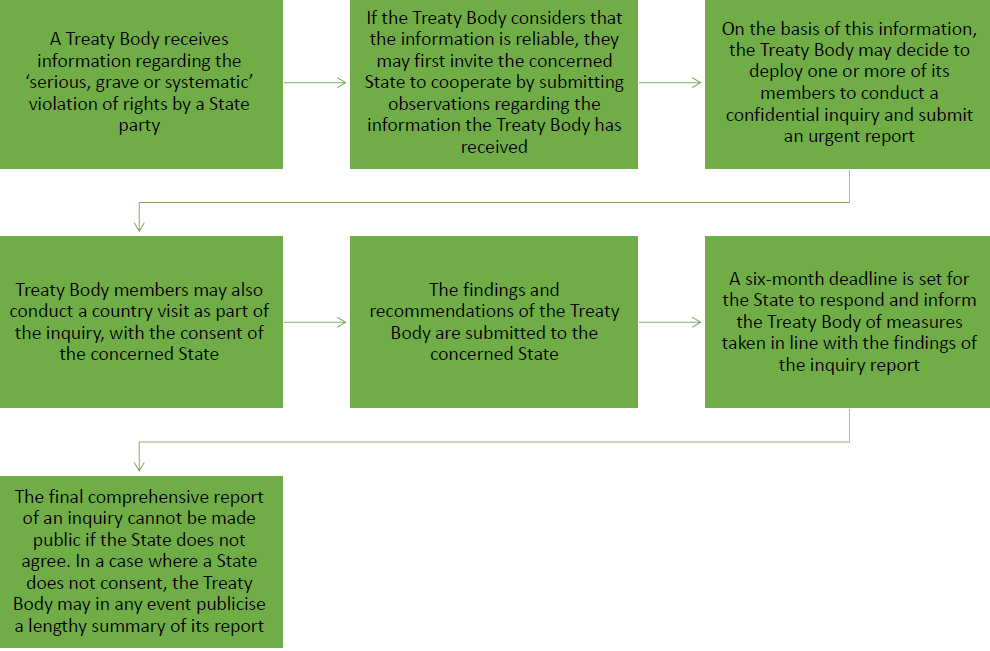 To view the steps of a Treaty Body Inquiry Procedure, click here

To find out what you can do with a Treaty Body inquiry report, see ISHR Academy: Following up with Treaty Bodies.

See the next sections on how you can engage in Treaty Body early warnings and urgent actions.